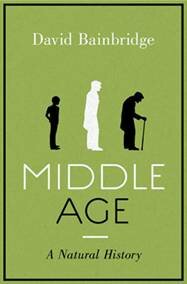 It was these simple questions that set David Bainbridge, a popular science writer and Cambridge University vet and anatomist, on a evolutionary, biological and cultural quest to discover just what middle age actually is, and why it is such a crucially important human innovation.

Despite the constant media bemoaning of this supposedly negative phase of life, and the fact that we each spend decades experiencing it, middle age has received surprisingly little insightful scrutiny. We think we know what happens to mind, body and relationships during middle age, but is this ‘common knowledge’ just a morass of unsubstantiated clichés?

By stripping away our assumptions about middle age, David Bainbridge gradually unravels the complex biological-psychological-cultural phenomenon that is middle age. Along the way, he addresses the questions that others prefer to avoid:

– Why do people age? Why, then, are humans less likely to die during middle age than at any other time?

– Is it really true that middle age has not occurred during most of human history, simply because most people died at thirty?

– Why to we get long-sighted, chubbier and generally less elastic?

– If, as we are often told, the human brain deteriorates as we get older, why do middle-aged people seem so much more able than younger people?

– Why does time seem to speed up as we get older?

– We often hear that people are unhappier in middle age – but is this really true?

– Which of us are most likely to have a healthily functioning brain by the end of middle age? Can we do anything to keep our brain working well?

– Does your experience of middle age depend on who you are, or your expectations of it?

– How much sex do middle-aged people have? And why?

– The menopause does not occur because women ‘run out of eggs’ – so why does it happen? And why only in humans?

– Is it dangerous for older mothers to have babies? What about older fathers?

– What is the male midlife crisis? Does it even exist?

– How is each individual one of us meant to cope with our changing relationships in middle age?

…and why did we humans, uniquely, evolve middle age? Over the course of this inspirational yet carefully argued book, middle age is revealed to be a complex, subtle, circumscribed biological phenomenon, onto which we have grafted a wealth of cultural assumptions, superstition and folklore. Most of all, middle age emerges as the defining phase of human life – for the individual, and for our species.

Publication of Middle age led to

– An edition of Four Thought on BBC Radio 4 on 16th November 2012, focusing on the male midlife crisis. See the online magazine article here, which also has links to the podcast and iPlayer editions of the programme.

– An edition of Start the Week on BBC Radio 4 on 2012, on evolution and experiences of middle age. To listen again, click here.

– A full article in New Scientist, also in the Washington Post.

– And many other appearances on other UK, non-UK and international radio stations.

– Features and stories in the Observer, the Toronto Globe and Mail, the Independent (three: 1,2,3) the Sun, the Telegraph (three: 1,2,3), and serialisation and a story in the Daily Mail.

Our middle-aged years, according to this defiantly optimistic book, are our glory years. Bainbridge is a Cambridge University veterinary researcher, and his zoological examination of the human animal results in a study that is full of surprises. …The menopause gets a whole, fascinating chapter

This is a very jolly book, with clear scientific explanations. As a human being he wonders what’s happening. As a scientist he decides to investigate. I particularly like Bainbridge’s theory of why time appears to speed up when you enter middle age.

David Bainbridge is the best kind of writer on this subject; reassuring without being woolly and articulate without being incomprehensible. You won’t get any less middle-aged reading this book, but you’ll feel better about it.

Looking beyond the clichés, veterinary surgeon and reproductive biologist, David Bainbridge, who teaches at Cambridge, sets out to discover “what middle age is and what it is for”. Most of us could have a pretty good stab at the first question, but the latter is where Middle Age gets interesting.

In almost every area of his research, Bainbridge proposes several possible answers. As is the way with evolutionary theories, this often raises more questions than it answers, which could be annoying but is actually thought-provoking and should certainly shed some new light on one’s own potbellied or menopausal mid-life crisis… He’s interesting too about topics like why time seems to speed up as we get older and what the evolutionary advantages for going through menopause are.

In this determinedly chirpy book, David Bainbridge wants to show that the years between 40 and 60 actually represent a kind of sunlit upland of “maximal” experience… There is plenty of fascinating detail to scavenge along the way, the sort of thing you could drop into conversation at a middle-aged dinner party.

All of this resonates…